An up-to-the-minute ranking of the fastest moving songs shared on Twitter in the U.S., measured by acceleration over the past hour. Titles are ranked based on a formula comparing the number of times they are shared within the last hour to the hourly average of shares over a rolling 24-hour period.

A real-time view of the most shared tracks in the U.S. on Twitter over the past 24 hours.

A ranking of the most shared songs on Twitter in the U.S. by up-and-coming artists (defined as artists with fewer than 100,000 Twitter followers who have also not appeared as a lead artist in the top 50 songs on the Billboard Hot 100 and who have not had an album place in the top 50 of the Billboard 200), ranked by the number of times each song was shared over the past 24 hours.

A weekly ranking of the most shared songs on Twitter in the U.S. by up-and-coming artists, ranked by the number of shares over a seven day period (Monday to Sunday). This chart is available online on billboard.com and billboard.biz, and in print in Billboard.

A weekly ranking of the most shared and/or mentioned songs on Twitter in the U.S., listed by the volume of shares over a seven-day period (Monday to Sunday). This chart is available online on billboard.com and billboard.biz, and in print in Billboard.

What activity do the Billboard Twitter Real-Time charts measure?

Each of the charts rank the most emergent songs that are being shared on Twitter in the U.S.

Song shares are tracked and incorporated into the Billboard Twitter Real-Time Charts by:

the use of, or the inclusion, of a link to the song via music listening platforms, such as Spotify, Vevo and iTunes.

the use of various track sharing notations, such as the hashtags “#nowplaying” or “#np,” along with song/artist name.

the use of various terms associated with the song and song playing, such as “music,” “song,” “track,” “listen.”

Below are some examples illustrating the types of tweets about Ariana Grande’s “Problem,” which could be counted towards a position on the Billboard Twitter Real-Time Charts:

This tweet uses the artist’s official Twitter handle, the song name, and a streaming link. It has an excellent chance of counting towards the charts.

This tweet uses the artist’s official Twitter handle and song name, but does not include a streaming link.  It has a great chance of counting towards the charts.

This tweet includes a conversation about a song, along with the name of the artist and song title, but does not include hashtags, official Twitter handle, or a streaming link. This example has a good chance of counting.

Do the Billboard Twitter Real-Time Charts only count positive tweets about a track towards its ranking?

The charts factor in both positive and negative comments included in a tweet when determining whether it counts towards a track’s ranking. However, the rankings are biased towards positive or neutral connotations when the track is shared, since most negative tweets do not include a song link or a track sharing hashtag, such as “#nowplaying.”

What does “Real-Time” mean?

Twitter aggregates all song shares in the U.S. as they happen. The Billboard Twitter Real-Time  Charts present an updated ranking every minute.

There is a slight difference in how the rankings on each chart are calculated. The Billboard Twitter Trending 140Chart ranks songs based upon acceleration in shares: total shares over the past hour compared to the song’s hourly average over the past day. The Billboard Twitter Emerging ArtistsChart ranks songs based on pure volume of shares over the past 24 hours. In addition, the Emerging ArtistsChart only includes songs by new and developing artists, who are defined as those who have fewer than 100,000 Twitter followers and have not appeared as a lead artist in the top 50 songs on the Billboard Hot 100 or in the top 50 albums of the Billboard 200.

What time period do the weekly charts represent?

Where can I find the Billboard Twitter Real-Time Charts online?

All of the chartscan be found on billboard.com, billboard.biz, and on the Billboard app.

What information is displayed on each chart position?

Each track position contains information about the song and its relevance on Twitter.

On mobile, use the top level drop-down menu to navigate to different charts.

Current position: Where the song ranks within the chart.
Change since last position: Movement from the song's last recorded position on the chart.
Song Title: The name of the song.
Artist Name: The name of the artist.
Playback Options: Available audio playback platform options for the song.
% Change: The percentage change of a song’s total volume of sharing across Twitter in the U.S.
Trend Line: A 30-minute history of the song’s share performance across Twitter.
Artist Twitter Name: The verified Twitter handle of the artist.
Peak Position: The top position that the song has reached on the chart.

Can I play all the songs on each of the Billboard Twitter Real-Time Charts?

Yes, each chart can be played via Spotify, currently only available on desktop. 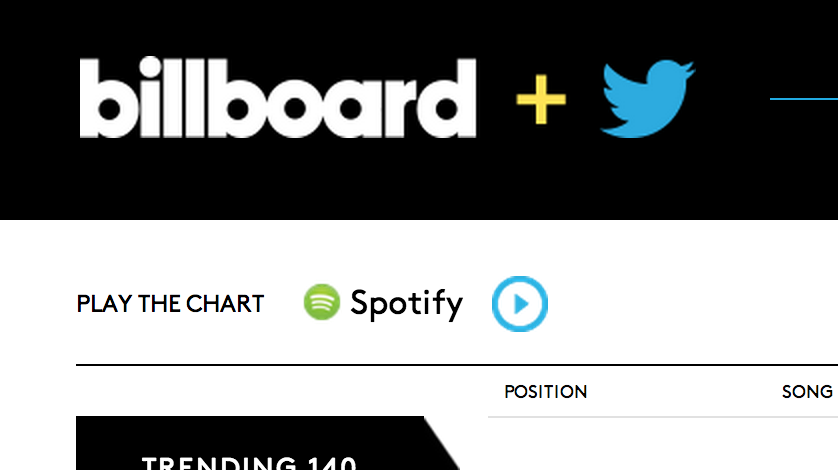 To share a song, simply click the song title and tweet about it. Using the artist’s verified Twitter handle, the song’s title, or a link to that song on a music listening platform, such as Spotify, Vevo or iTunes in your tweet helps influence its ranking on the charts.